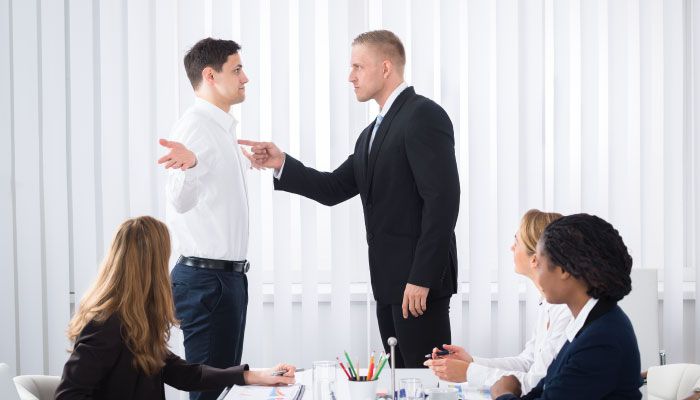 Are you resolving conflicts for good—or do they keep coming back?

In her AudioSolutionz webinar, “Tackle Workplace Conflict: Difficult People, Disagreements & Stressful Situations,” executive coach and management consultant Marcia Zidle talked to attendees about the practical skills to confront discord and greatly advance leadership skills—so that they are less likely to back away from problems that deserve your attention. In the article below she mentions how Workplace Conflict can sink you if you aren’t on the look out – it’s cliched but kinda like the Titanic.

In a recent program on conflict resolution for the marketing department of a health care company, I asked the following.

As you would expect, this generated a lot of conversation. I had set the expectations of open discussion without finger pointing or blaming. I used the idea of an iceberg to help people think about conflict in a positive, problem-solving way

Above the water line are the “Symptoms” – For example:

Below the water line are the “Real Causes” – Here are six:

A common example is when two people can view the same event (in a crime TV drama witnesses to a robbery) and have different perceptions (It was a tall guy with glasses; no it was short with a baseball cap, etc.)

The parable of the blind men and the elephant illustrates this. Briefly, six blind men wanted to know what an elephant was like. So they went to find one and when they did, each touched a different part of the elephant. Of course, each had a different impression.

How do you start a puzzle? From number 1 and go systematically? Or start anywhere you can and work from there? Is one way better than another? It depends.

In many companies, sales and marketing is driven by quotas – getting more customers; production by quality – making sure it meets specific standards.The conflict arises when one group has expectations of what’s important that don’t coincide with the other group.

Who does what? It’s your job; not it’s yours; I make the decision; no I do. This happens a lot regarding line and staff authority; or corporate vs business units.

Someone is a quick, shoots from the hip decision maker and the other is slower, more methodical. Or someone is task focused, and wants you to get to the point fast and the other likes to talk about all kinds of things before getting down to business.

What Was Causing the Most Departmental Conflict?

It was role based differences. There was lack of clarity as to who’s accountable for monitoring deadlines as well as who has final authority on marketing collateral and a whole range of other issues.

What are the main conflicts you’re experiencing? How are you resolving them?

What Was the Solution?

I introduced Steven Covey’s model of Circle of Influence and had them focus on what they could influence. There were several suggestions: taking responsibility to ask questions and verify client’s expectations; using less email and more personal communication with other departments; and to get clarification and support from management as to the department’s responsibilities and authority.

Conflict is inherent in our differences—in people’s differing backgrounds, perspectives, values, needs, goals, expectations, etc. Conflict by itself is neither good nor bad. It’s the way we manage conflict that produces constructive or destructive results.

Did You Know That a New Kind of SMARTS is Needed?

75% of leaders are derailed for reasons related to emotional competencies, including inability to handle interpersonal problems, unsatisfactory team leadership during times of difficulty or conflict; or inability to adapt to change or elicit trust. – Center for Creative Leadership.

Editor’s note: The original article had the following note – ‘This article is reprinted with permission of the author. In her webinar, Zidle shows you how to turn disagreements into positive outcomes by honing your abilities to: solve problems, communicate clearly, better understand others’ points of view, and think creatively.’