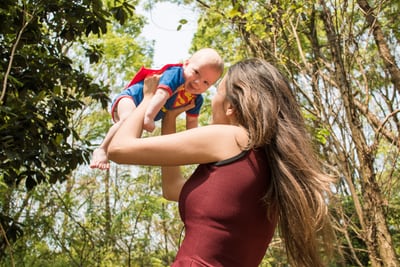 Child care in America has become increasingly inaccessible. In the U.S., 51% of all residents live in a region with very few, if any, child care providers 3. In 2016, the average cost for center-based infant care was higher than a year’s tuition and fees at a public college in 28 states and the District of Columbia.4

Today, the United States is the only developed OECD country without a formalized mechanism for paid parental leave. The closest alternative currently available is the Family and Medical Leave Act (FMLA) of 1993, which provides job-protected unpaid leave to parents working for large employers, who also meet a number of other requirements. While innovative at its inception, in today’s era when both parents are more likely to work, many cannot afford significant time off without income. For example, in 2016, roughly 37% of Americans had to take on debt to cover parental leave 1.  Still, 41% were forced to cut their leave time short due to financial constraints 2.

Congress recently increased the Child Tax Credit (CTC) from up to $1,000 per year to up to $2,000 per year. A bipartisan paid-leave plan that uses the child tax credit (CTC) to provide new parents with immediate funds to finance time off from work or to offset the cost of infant care was released for discussion July 24 by U.S. Sens. Bill Cassidy, R-La., and Kyrsten Sinema, D-Ariz.

Cassidy and Sinema’s proposal would allow the parents of a newborn or recently adopted child under age 6 to accelerate their CTCs to receive $5,000 immediately and $1,500 from their CTC for the next 10 years. These funds could be used to replace income while taking leave from work or to pay for child care if parents work outside the home.

Low-income families that do qualify for the full, refundable CTC would be able to bring forward their CTC benefit to receive the equivalent of 12 weeks’ wage replacement and then receive their adjusted CTC benefit over the next 15 years.

The plan would not reduce the future Social Security payments of those using the benefit,unlike paid-leave bills introduced by Republican senators earlier this year, and it would not require employers to offer paid-leave time, as Democratic proposals would do. The benefit would be optional, allowing parents to continue receiving their existing CTC if they preferred to do so.

“This is a common-ground solution that can pass Congress and become law,” Cassidy said.

Paid-leave measures that have been released as proposals or introduced in Congress this year include: