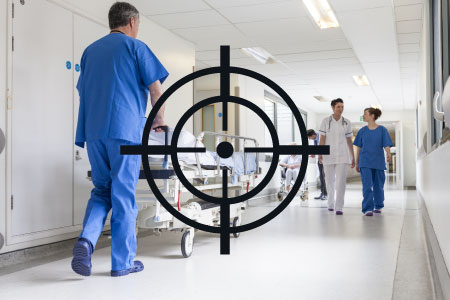 Random gun attacks and mass shootings make headlines nearly on a weekly basis, but shootings at hospitals are, thankfully, rarer. Lessons learned from recent events make it clear that hospital supervisors and managers need to make preparing for violence a priority and that any hospital employee who comes into contact with the public—from parking lot workers to surgeons—needs training in violence prevention and response.

Hospital shootings in the United States average about one per month, according to data presented and analyzed by Becker’s Hospital Review. Slightly more than half take place inside hospitals, with the remainder going down on hospital grounds. Shooters are typically men and most shootings happen in emergency rooms.

“Johns Hopkins researchers found the most common victim of shootings in hospitals or other healthcare facilities to be the perpetrator (45 percent),” the site noted. “Hospital staff, in total, composed roughly 20 percent of victims. Of the hospital staff victims, nursing staff made up 5 percent of victims, physicians comprised 3 percent, pharmacists made up 2 percent and the remaining non-medical staff, labeled ‘other,’ made up 10 percent.”

Urban and Southern Hospitals Are Vulnerable

A study by a Brown University researcher tallied hospital shootings between 2000 and 2015 and found fairly clearly-defined trends. Of 241 active shooter events found in that period, 105 occurred in the South, according to the study. Whether the shootings were inside or outside of hospitals, most shootings took place in urban areas. Of the 241 events, 50 took place in the emergency room.

Why are the shootings taking place? The Brown report said that “grudge” accounted for one-third of shootings, followed by social violence, an escape attempt and suicide. Of 241 events, 110 ended in suicide, while 61 shooters were arrested and 38 were shot and killed.

Most disturbing from the Brown report was the frequency—shootings in hospitals appear to be going up.

A different study, however, disputed the notion of rising violence, at least in a shorter term analysis. A report from the International Association for Healthcare Security and Safety (IAHSS) found that from 2014 to 2016, violent crime in hospitals went down.

Hospitals Respond With a Clinical Approach

Hospitals have responded using their own unique resources. For example, one health care provider in North Carolina implemented a round-the-clock, one-call, immediate response team which included not only security personnel but also a multi-disciplinary team of responders who had de-escalation and behavioral health training.

A plan from the IAHSS echoes the North Carolina plan, suggesting hospitals take the following seven steps for their facility:

A report from the American Hospital Association and others stressed that a hospital’s plan needs to be custom-made. “Hospitals should tailor their violence intervention programs to their specific needs and capabilities and the needs of their community,” the report said.

Steps that involve the larger community and that can guide such a program include:

Get Insight From a Leader in the Field

Defense expert Joe Rosner highlights preventing hospital shootings and responding to incidents in his conference for ProfEdOnDemand, “Active Shooters Prevention and Mitigation for Healthcare Facilities.” The session will help emergency department employees, public safety and security professionals, healthcare facilities maintenance employees, paramedics and others identify the warning signs of potential violence, determine what steps to take when a shooting occurs, identify tactics for fleeing or fighting back and understand common characteristics in recent active shooter cases.